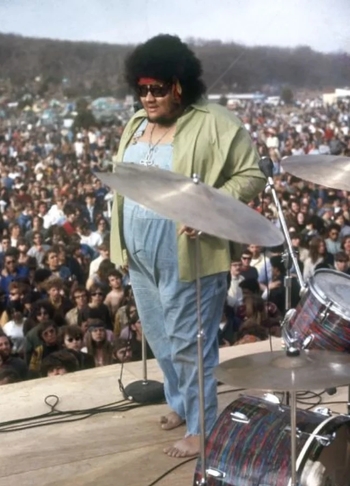 One big baby
Cold, cold eyes upon me they stare
People all around me and they're all in fear
They don't seem to want me but they won't admit
I must be some kind of creature up here having fits
- "Hard Times"
Advertisement:

A beloved cult figure within soul music, Baby Huey was never able to break into the mainstream, only recording enough material for a single LP before an untimely death. Born James Thomas Ramey in Richmond, Indiana in 1944, Baby Huey was literally a large stage presence; a glandular problem kept his weight around 350-400 pounds and beyond. He began performing in Chicago clubs in 1963 with his backing band named the Babysitters and soon became a popular concert draw. As the '60s kept on, Baby Huey's sound moved from frenetic R&B into psychedelic soul, with a vocal style that drew comparisons to Otis Redding. Huey also began wearing an Afro and wore African-inspired robes, and adding sing-song rhyme schemes to his live performances that were considered similar in style to rapping.

Although Huey and the Babysitters were a popular live band, they barely took time out to record, mostly due to Huey's health problems and burgeoning heroin addiction. And although Huey would record some solo tracks for Curtom Records (the record label owned by Curtis Mayfield). By October 28, 1970, he would die of a drug-related heart attack. And the material he had recorded was compiled into a record entitled The Baby Huey Story: The Living Legend.

Although he lived a relatively short life with a career that seemed even shorter, his sole LP would become lauded as a classic within soul music. With its tracks would be heavily sampled by hip-hop producers and gaining a status as a sought after record for soul music fanatics and the rare groove

Not too be confused with the rapper Huey, who was also nicknamed Baby Huey and who's life was also tragically cut short.