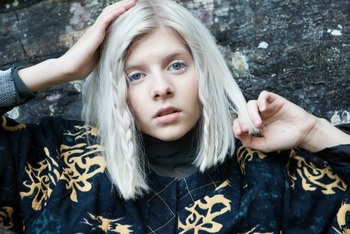 Aurora Aksnes (born June 15, 1996), also stylized as AURORA, is an indie pop singer-songwriter from Norway. Her style is an eclectic blend of Baroque Pop and Electronic Music, with soaring melody lines and introspective lyrics sung in her distinctive crystal-clear soprano voice.

Aurora describes her first experience with music as finding an old electric piano in the attic. She could only play with one hand because she had to keep pressing the on button, but she was awed by what she could create. She performed one of her first songs, "I Had A Dream", at her graduation ceremony. A friend of hers uploaded a video of it without her consent, attracting the attention of Made Management. Initially, she was upset, but her mother encouraged her to share her music with others.

In December 2012, Aurora released her first track "Puppet", followed by "Awakening" in 2013. Soon after, she was signed onto Decca Records/Glassnote, and released the singles "Under Stars", "Runaway", "Murder Song (5, 4, 3, 2, 1)" and "Running With The Wolves". Her debut EP "Running With The Wolves" was released in 2015, and was generally well received. Another single, "Conqueror" was released in January 2016. Her debut album, "All My Demons Greeting Me As A Friend" was released on March 11, 2016, and rose to the #1 spot in Norway. She promoted it with the single "I Went Too Far".

After working on new music in between shows, she decided to release her second album in two parts. The first, "Infections of a Different Kind", came out in late 2018, while the second, titled "A Different Kind of Human", was released in 2019.

Also in 2019, Aurora had her first international mainstream success singing in Frozen II, providing the mysterious wordless voice from the forest that vocalizes opposite Idina Menzel in "Into The Unknown." She performed the song on stage (well, in an elevated box) at the Academy Awards Ceremonies that year.

Aurora's fourth studio album "The Gods We Can Touch" was released in January 2022, featuring guest vocals by Pomme.

Often compared to Lorde and Sia.

Not to be confused with an actual Aurora Borealis/Australis.