Music / Antony and the Johnsons 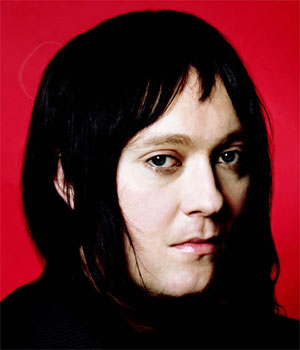 Antony and the Johnsons are the group performing the musical works of Anohni (formerly Antony Hegarty).
Advertisement:

The group released their debut album in 1998, after Anohni was discovered by British experimental musician David Tibet (of Current 93 fame), who offered to release her music on his own label Durtro.Their debut, Mysteries of Love, didn't really make a splash commercially or critically, and thus three years went on before the next EP, I Fell In Love With a Dead Boy which, along with the title track, contained a David Lynch/Angelo Bardalamenti cover from their Twin Peaks soundtrack collaboration and a Current 93 cover, as a tribute to Tibet.

The EP found its way to Hal Wilner, who played it to his friend Lou Reed, who was quickly enamored by Anohni's unique voice and Baroque Pop style. The Velvet Underground legend quickly recruited Hegarty for his upcoming record The Raven and the exposure enabled Anohni to ink a deal with American label Secretly Canadian. The band then released another EP entitled The Lake (on which Lou Reed lends his vocals for a feature), whilst Secretly Canadian also re-released their debut album in America in 2004.

A year later, the band's second full-length album I Am a Bird Now was released, and was met with both commercial and critical success, even earning Anohni a Mercury Award and some unkind words from supposed favorite Kaiser Chiefs, who claimed Anohni shouldn't be allowed to win as, even though being born in the UK, she lived and worked in the US. Yeah... Anohni then worked with a myriad of creative individuals for different projects, lending her skills to produce music for works such as the movie adaption of V for Vendetta.

In the middle of January 2009, the band's third full-length album The Crying Light was released and went straight to #1 on the Billboard list, garnering further critical praise for its many themes, as well as the evolving musicianship of Anohni and her group members. The group then toured extensively, often performing with symphonic orchestras. In June 2010 the group ended their touring in Japan, where Anohni, along with William Basinski and Johanna Constantine, performed with Yoshito Ohno, the son of 103-year old Kazuo Ohno, depicted on the cover of The Crying Light. The elderly dancer died the following June, and Anohni wrote an obituary for him in English paper The Guardian.

October 2010 saw the release of the group's fourth full-length album Swanlights, released simultaneously with a book of the same name containing Anohni's drawings and collages made in collaboration with photographer Don Felix Cervantes, once again showcasing Anohni's creativity and talent. To no one's surprise, the album was met with critical and commercial success, earning several high placements on different media's end of the year lists and cementing the group in the music industry.

Anohni was chosen to curate Meltdown 2012, an annual festival at Southbank Centre in London wherein a musician is picked to choose the entire lineup. Previous curators include Nick Cave, Patti Smith and David Bowie.

After coming out as transgender, she has started releasing solo material under her current name. Her solo debut album Hopelessness was released in 2016.

Antony and the Johnsons are: