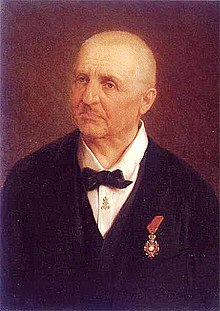 Josef Anton Bruckner (4 September 1824 – 11 October 1896) was an Austrian composer, organist, and music theorist best known for his symphonies, masses, Te Deum and motets; his symphonies are considered emblematic of the final stage of Austro-German Romanticism due to their rich harmonic language, strongly polyphonic character, and considerable length. His compositions helped to define contemporary musical radicalism, owing to their dissonances, unprepared modulations, and roving harmonies.
Advertisement:

His works, particularly the symphonies, have detractors, who point to their large size and use of repetition. Bruckner's propensity for revising many of his works, often with the assistance of colleagues, and apparent indecision about which versions he preferred has only helped to further complicate matters.note There's at least six versions of Symphony No. 3 in D minor alone. Symphony No. 4 in E♭ major is just as bad; Symphony No. 8 in C minor has at least two versions as well. On the other hand, Bruckner was greatly admired by subsequent composers, including his friends Richard Wagner and Gustav Mahler.

Perhaps a case of Vindicated by History, his music is now widely beloved even in Vienna, where it now has an important place in the tradition and musical repertoire of the Vienna Philharmonic; his music was much maligned there in his lifetime.

Tropes present in his life and works: