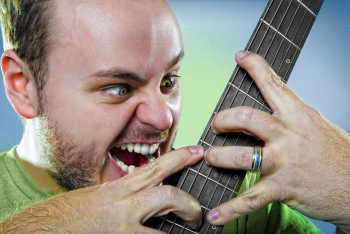 Pretty good at guitar, I see.

Andy McKee (born April 4, 1979) is an American musician, and is considered one of the world's best acoustic soloists. Born in Topeka, Kansas, he garnered a considerable fan following after a video of his song "Drifting" became popular on youtube

Despite being only one man, his playing style creates an assortment of sounds that create the illusion of a whole band. He uses a wide variety of altered tunings, techniques and instruments to achieve this effect, from playing double-overhanded(instead of having his fretting hand be underhand like normal), sounding harmonics with his picking hand while his fretting hand picks the string(opposite of the usual method), using his fingers and hands for percussion, and instruments like harp guitars(standard six-string guitars with a second series of unstopped strings, played harp-style) and baritone guitars(a six-string guitar tuned normally, but with a longer neck length, lending a deeper, fuller sound).