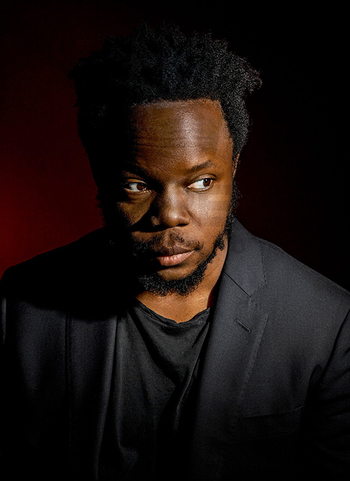 In his 15-year career, Ambrose Akinmusire has situated himself in both the forefront and the sidelines of jazz, emerging similarly as a fairly known and lauded trumpeter in classical and hip hop circles.

Born and raised in Oakland, California, Akinmusire's approach to sound and composition with breathtaking virtuosity and tonal control made him a regular on critics polls and have earned him grants and commissions from organizations such as the Doris Duke Foundation, the MAP Fund, the Kennedy Center.

Akinmusire formally made his debut on the Fresh Sound New Talent label in 2011 with the album Prelude...to Cora, released to a sizable amount of acclaim. He would soon follow this up by playing with other burgeoning and established acts such as began performing with Vijay Iyer, Aaron Parks, Roy Hargrove, Esperanza Spalding, and Jason Moran, the latter of which allowed him to take part in the concert event In My Mind: Monk At Town Hall, 1957. This would prove to be a boon for him. Since it had introduces his talents to Bruce Lundvall, the then President of Blue Note Records.

He would soon release all of his future records on the Blue Note Label, including the lauded The Imagined Savior is Far Easier to Paint. He would also play on Kendrick Lamar's To Pimp a Butterfly on it's finale track, "Mortal Man", allowing his renown to reach mainstream hip-hop circles for the first time.

On the Tender Spot of Every Calloused Trope