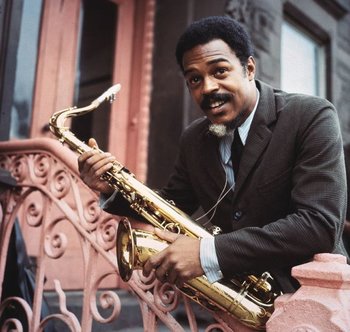 One of the most distinguished names in free jazz, Albert Ayler was an African-American jazz saxophonist, singer and composer.

Unlike his contemporaries, Albert Ayler was not a saxophone virtuoso who had come up through the bebop ranks. His first gigs, were in fact, in R&B bands, including one led by blues harpist Little Walter, however strangely enough he was nicknamed "Little Bird" in his early days because of a similarity in sound on alto to Charlie Parker. He would also have a period in the army, in which he played in a service band and switched to tenor. Unable to find work in the U.S. after being discharged, Ayler spent time in Sweden and Denmark during 1962-1963, making his first recordings and working with Cecil Taylor.

In 1964, he toured Europe with a quartet that included Don Cherry and maintained a sound that was quite cathartic and emotional. The following year he had a new band with his brother Donald Ayler on trumpet and Charles Tyler on baritone, and the emphasis in his music began to change. Ayler had begun to experiment with microtonality, traditional folk melodies and collective improvisations. His ESP recordings from this era and his first couple of Impulse records find Ayler at his peak and were influential, inspiring musicians such as Sonny Sharrock and John Coltrane, whose post-1964 playing (particularly Ascension) was inspired by Ayler's innovative saxophone playing.

However, during his last couple of years, Albert Ayler's career seemed to become quite undirected as his future recordings would find him playing in a style much more reminiscent of the R&B and rock music of the time. This would lead to accusations of selling out by audiences and critics alike. In 1970, however Ayler returned to the free jazz idiom for a group of shows in France (including at the Fondation Maeght). Unfortunately, he would disappear on November 5th of the same year and he was found dead in New York City's East River on November 25, 1970, his death being listed as a presumed suicide.