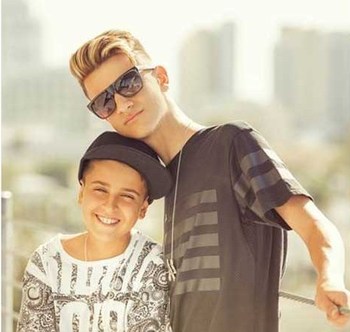 Adexe & Naunote the '&' here pronounced 'ee', as in "y", the Spanish for "and" are a Latin music duo from Tenerife. They are brothers, Adexe the younger (July 7th 2005 —) is the main singer on their songs, and Nauzet (December 9th 2002 —) is the rapper. They started doing covers of popular Latin music songs, and now write their own, including songs for the Castillian dubs of films like The Emoji Movie and Jumanji: Welcome to the Jungle. One of their most popular songs is the single "Sólo Amigos" ("Just Friends").