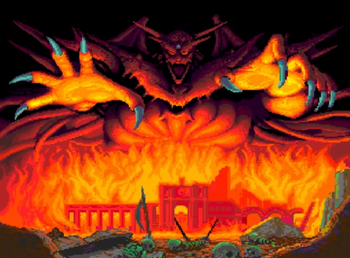 "Brother and sister, dying together... what a nice image!" The Wanderers from Ys version of Galbalan is a sadistic monster.
"I am pure evil. My followers and I are born from the dark magic of the Black Pearl. I am the living embodiment of terror and destruction. You don't stand a chance against my forces of desolation. I shall crush and consume you!"
—Darm, Ys II: Ancient Ys Vanished – The Final Chapter
Advertisement:

The Ys series has been around since 1987, and thus is complete with its own gallery of nasty villains.