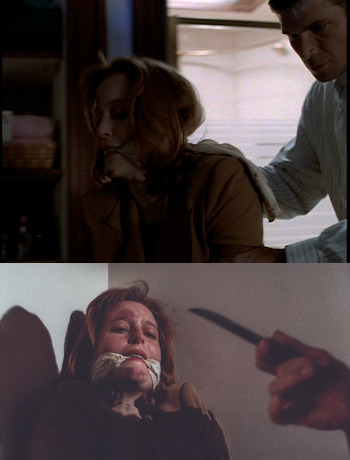 "Donnie Pfaster is a death fetishist-- a collector of bone and dead flesh, of toenails and hair. It's what floats his boat, gets him off."
"You can kill a man but you can't kill what he stands for. Not unless you first break his spirit. That's a beautiful thing to see."
—The Cigarette Smoking Man, "The Beginning"
Advertisement:

The X-Files featured many monsters. Some of these were genetic mutants who acted on predatory instincts and followed their biological needs. However, several of them crossed into the Complete Monster territory. Often these cases were surprisingly light on the paranormal stuff, making them fairly mundane and all the more frightening.

Examples from Millennium can be found here.