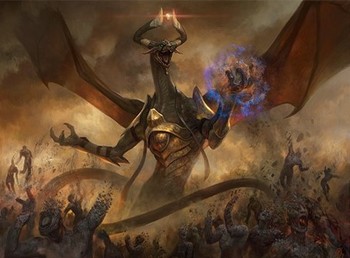 'I have devoured stars and shattered worlds. I have sired whole races, populated entire planes, and then hunted them to extinction for my amusement.'
"If a man dedicates his life to good deeds and the welfare of others, he will die unthanked and unremembered. If he exercises his genius bringing misery and death to billions, his name will echo down through the millennia for a hundred lifetimes. Infamy is always more preferable to ignominy."
— Fabius Bile at the Desecration of Kanzuz IX
Even in the world of

tabletop gaming, there still exists some completely despicable villains. Below are some of the worst and most atrocious bastards ever to roam the table top. Hope you roll well.