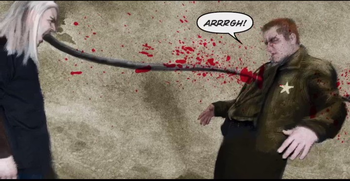 "He was a light snack. His heart was in excellent condition. And it was tasty."
"There it is. The freakin' cosmic all. I could be like her. Like whatever it is that's inside old Connie here. A god. A goddess. All-powerful. Worshipped on more worlds than i could dream of. Opposed only by those we allow to stand against us to keep eternity from getting too boring. Torturing souls and having a good old time, reshaping worlds, burning the fuck out of the universe."
—Christabella LaRoache, upon being given "awareness" by Samael, Dead/Alive issue #5.
Advertisement:

Silent Hill is a town with numerous monsters, both literal and figurative. Here are the worst of both categories.