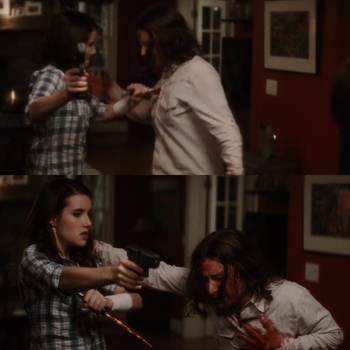 "What the media really loves baby...is a sole survivor. Just ask you-know-who."
"I always knew I was a sociopath. I mean, why do you think I love horror movies so much? I watched every single one I could get my hands on until I realized it just wasn't quite enough. Why should Michael Myers get to have all the fun when I could be a better monster? Because I'm not just some actor behind a mask. This is who I really am on the inside."
—Beth, Resurrection, "Endgame"
Advertisement:

Various incarnations of the masked killer known as Ghostface, as well as other Serial Killers, have proven to be monstrously vile.