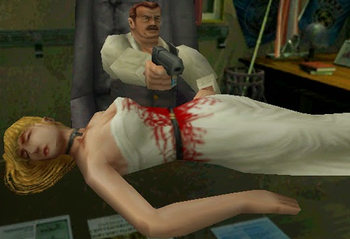 "I wonder if the mayor's daughter is still alive? I let her escape so I could enjoy hunting her down later... I'm going to enjoy my new trophy. Yes, frozen forever in the pose I choose to give her."
"Six billion cries of agony will birth a new balance!"
— Albert Wesker, Resident Evil 5
Advertisement:

While many villains in the Resident Evil franchise trend towards Tragic Monster, or are simply too inhuman to pass moral judgement on, there are these major exceptions, who prove that Humans Are the Real Monsters.