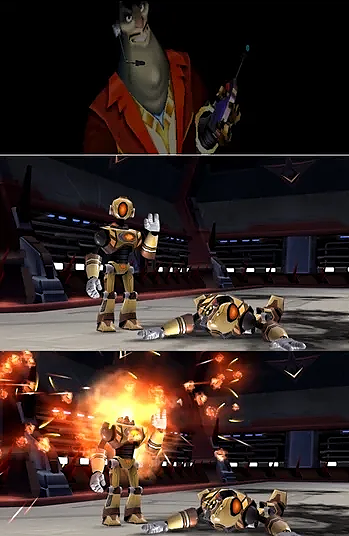 "Should a contestant become uncooperative or worse, boring, his or her collar can be detonated at any time with the push of a button."
Rivet: Enough, Nefarious! You're tearing reality apart! If you don't stop—
Emperor Nefarious: Oh no! The thankless, uninspiring dimensions are collapsing?! Oh, how could I?! Enough! I will collapse every dimension into nothingness! A vapid, empty void! Say goodbye!
—Rift Apart
Advertisement:

Our titular gun-toting Lombax and robot have come across many tough cookies over the course of their adventures, but their universe's tongue-in-cheek humor and social satire hasn't stopped quite a few ne'er-do-wells from committing crimes beyond the scope of the cosmos.