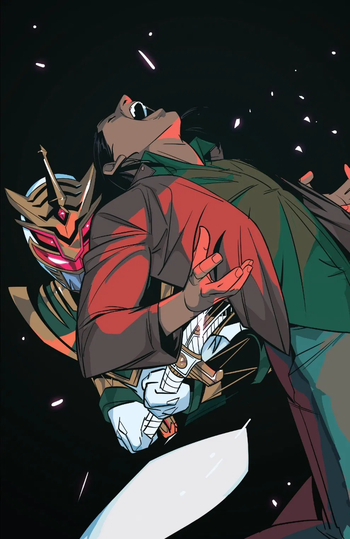 "I've had it with being an Org. This is ridiculous. I can't trust any of you, especially you. You've lied and cheated and have destroyed anyone around you. For 3,000 years, Toxica and I waited for your return, and for what? You've betrayed your most loyal Duke Orgs, ones who would do anything for you, including cutting off their own horn. You are beyond evil, you have no heart. You don't deserve anyone's loyalty. You've destroyed my best friend and my faith in Orgs."
— Jindrax to Master Org, Wild Force, "The Master's Herald, Part 2"
Advertisement:

Though Power Rangers is a children's series, it isn't free of this trope and it features some villains who are particularly evil and despicable.

Others (by publication/release date)