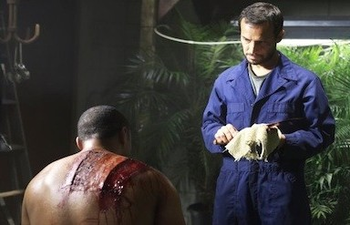 "I can do this all day...it's no skin off my back."
"[Gunther Lutze] was a black-uniformed strutting animal, whose function in life was to give pain, and like his colleagues of the time, he shared the one affliction most common amongst that breed known as Nazis: he walked the Earth without a heart."
— The Narrator, The Twilight Zone, "Death's Head Revisited"
Advertisement:

Television has evolved a lot over the years. It used to be that you couldn't even say the word "damn" on the airwaves. Now you've got entire cable channels where people can say anything they want without restriction. These looser standards have also made it that much easier to showcase genuinely dark and horrifying villains, some of which are so depraved that it's a real wonder how they are even allowed to be on prime television. These characters can be either recurring or, especially in the case of Crime and Punishment Series, Monsters Of The Week (no pun intended).