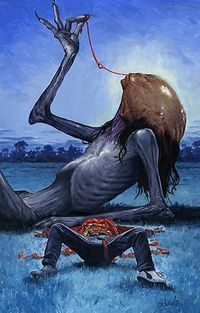 "Thick, fresh blood poured down Rawhead's throat; he gulped it greedily...This was only the first of many meals he would take; he'd gorge on anything that took his fancy...And when he was ready he'd...cremate them in their houses...slaughter their children and wear their infants' bowels as necklaces..[The] earth...was his, and nobody would take it from him."
"(Simon) Legree is introduced...for...bringing to the minds of honourable Southern men...a very important feature in the system of slavery...: that no Southern law requires any test of CHARACTER from the man to whom the absolute power of master is granted."
—Harriet Beecher Stowe, A Key to Uncle Tom's Cabin (can be found here

Before video games, movies, and television showed up, many forms of short stories and novels provided multiple kinds of twisted, abhorrent characters that are still remembered to this day.