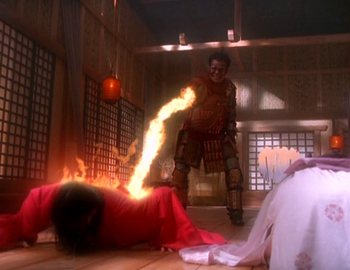 "I am at your service, Lord Yodoshi." "You most certainly are. An eternity of playing the whore to service my appetite for souls."
"The one great evil is here. It's part of that creature that was with her. Oh, we've sensed him. Everyone on Olympus has. This... this force of darkness spells the end of all of us—gods and man alike."
—Ares on Dahak, Hercules: The Legendary Journeys, "Armageddon Now: Part 1"
Advertisement:

A time long ago, a time of myth and legend, when the ancient gods were petty and cruel, and they plagued mankind with suffering. The world cried out for heroes. These are the worst that Hercules, Xena, and their companions have ever faced, whether god, warlord, or king.