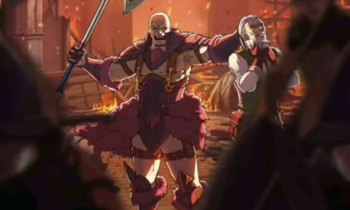 "Let me relieve you of your head! Bwahaha!"
"That Queen Hilda...is wicked to the core. She began abducting kids after allying with this dark bishop [Manfroy]. She kills the mothers, too, without a blink of an eye! That woman's not even human. I'd say she's more like a devil!"
— A Miletos villager, Genealogy of the Holy War

Fire Emblem has many characters, and the villains come in many varieties, but only a few are Complete Monsters.note Only the romanized names are used here. If there's a difference between the European and American versions, the American version is used.