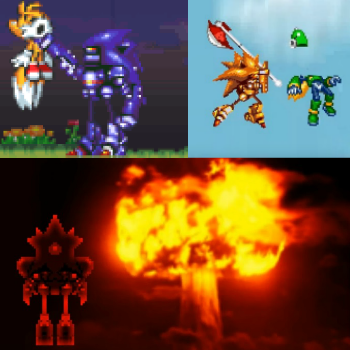 "Monster? I'm not a monster. I'M A GOD."
"That thing, the S'Müz, is the PKE phenomena you detected yesterday; a big ol' cloud of psychokinetic energy with a bad attitude, a murderous attitude. The second it enters this reality it's going to start killing every living thing on this planet, then every living thing in the galaxy, then the universe, etcetera, etcetera, until nothing remains. Anywhere."
—The Doctor explaining to Twilight Sparkle what the S'Müz wants, Time Lords and Terror
Advertisement:

Examples from Fan Games can be found here.