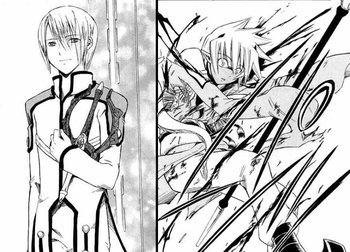 "The Teru and the Reyvateils will be destroyed."
Cosal: There are so many more alive and yet to live in this place beside yourselves. You intend to make sacrifices out of them all?!
Revelt: No, not sacrifices... this is a culling.
Cosal: What did you say?!
Revelt: Those who cannot progress, those who can do nothing to improve themselves on their own must be culled. That is the law of the heavens. And this situation, which I have carefully crafted, is only an expression of the law, ergo, simply a manifestation of a natural phenomenon. For you see, I am myself an existence inside the natural world, as I am energy, and life as well. When a Burst falls and burns a city, the birds, insects and animals living there will run for their lives, so as not to be burned with it. Likewise! By trying to live on and survive in a new world, even if it destroys this one, I am only following the laws of nature! The strong live, the weak die. That's all there is to it, and that's all that's happening here and now.
—Ciel nosurge

At the surface, the EXA_PICO games looks like light-hearted and cheery JRPGs, but beneath the surface are serious stories tackling dark themes with these twisted villains.