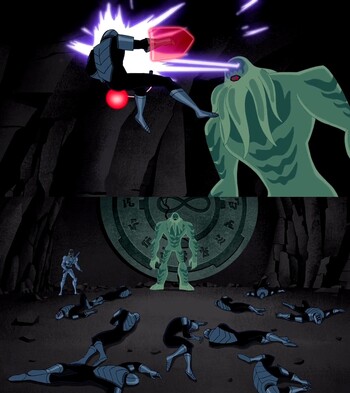 "You have all earned your demise at my hands!"
Eon: We're partners! I deserve to be in on every detail of your plan! Especially when it involves a bomb!
Vilgax: Not just any bomb! A Chronosapien Time-Bomb!
Eon: So you're going to wipe out this Ben 10 and his timeline? Nice.
Vilgax: On the contrary, the detonation won't even touch this timeline. It's designed to wipe out other timelines.
Eon: Which one?
Vilgax: All of them.
(Bomb is activated)
Vilgax: (laughs) Only this timeline will remain intact, while every Ben Tennyson not from this timeline will be destroyed.
Eon: But I'm an alternate Ben Tennyson not from this timeline! What..what happens to me?
Vilgax: Thank you for your help Eon. Your assistance is no longer required.
—Omniverse, "And Then There Were None"
Advertisement:

Since 2005, Ben Tennyson and his allies have been fighting off evil from Earth or space, and while some of their foes have had sympathetic qualities, these guys quite frankly do not.