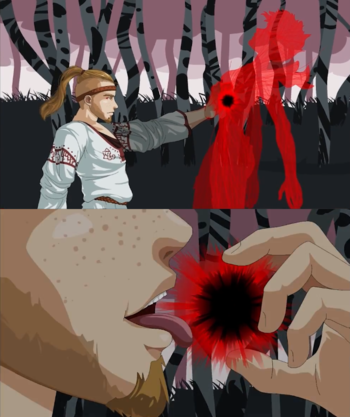 "My deal? What a curious expression. I don't have a 'deal'. I needed sustenance. Hmm. She wasn't enough. I need more."
"Little hero, Hope is a lie. Joy is a mask that all life wears to hide from the truth. That EVERYTHING ends. The universe's true nature is decay and rot. The universe's ultimate form after all is played out in cold, empty nothingness. I am an agent of that nothingness, and the Beast Quetzal is the tool I will use to speed all life on Lore to its end. Your world dies, not in flames, but in ice."
—Kezeroth, AdventureQuest Worlds
Advertisement:

Artix Entertainment has spawned some very vile villains throughout its many games. These are the very worst of the lot.

Games are by release date.