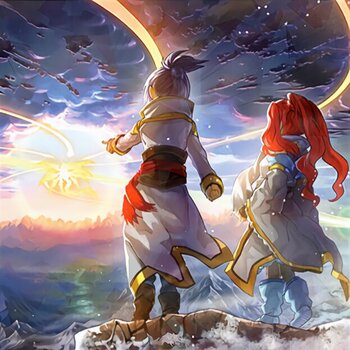 A story of a planet's defiance against fate, told across three generations of war.
Advertisement:

The Master Guide series of official books provides the most authoritative information on the exact happenings and details of the storyline, telling the entire story across Master Guide 3-5 and the Duel Terminal Master Guide

special. Translated versions of these books' contents can be found on Yugipedia (3

).note 3 and 4 only contain brief summary sections on parts of the DT storyline; the DT special and Master Guide 5 describe the bulk of the storyline and exclusively contain DT storyline info.

Originally in OCG, in Act 1 and 2 of the storyline, the cards involved in the Duel Terminal storyline are physically first released on the Duel Terminal machines, which dispense physical OCG cards after plays. Many of these cards were later re-released in more conventional packs; in TCG most of these cards were first released in the Hidden Arsenal series of card packs, hence the Hidden Arsenal name.

The Duel Terminal machines were operated from 2008-2013. The storyline continues after 2013, and newer card releases are now integrated into OCG/TCG Core Set booster packs. Series 8

released in 2014. Aside from a brief detour where a number of Act 3-related cards are first released in Booster SP: Tribe Force

(and its TCG counterpart, The Secret Forces

), all of the Act 3 storyline cards are released in Series 9 Booster Packs, concluding the storyline alongside Series 9 in Maximum Crisis

The story is set on an unnamed planet populated by a diverse array of races and cultures. There are three major acts to the story:

For other Yu-Gi-Oh! metaplots, see here.

The Metaplot contains examples of: