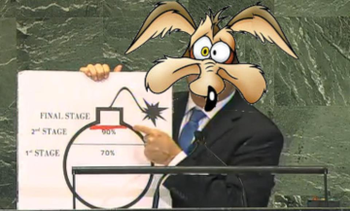 Benjamin Netanyahu's bomb was a little too simplistic.

That's right, even politics can be a great source of memes, though it's not that surprising considering the kind of stuff that escape the lips of certain politicians.

When adding an example, please write the meme, then add the explanation of the meme inside a labelnote titled "Explanation." Explanation This is just the example. Follow it this way.

Canadian Politics
Canadian politics is full of this stuff; TOW has a more comprehensive list