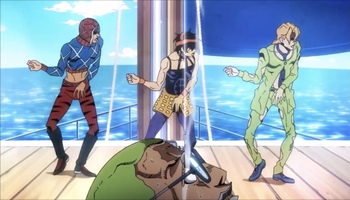 ♫ Vocal percussion on a whole 'nother level
Coming from my mind ♫
Being one of, if not the most memetic JoJo part, it's bound to have more than one meme as listed below.

For Jojo memes based on other parts, see here.

Please add entries in the following format if possible: