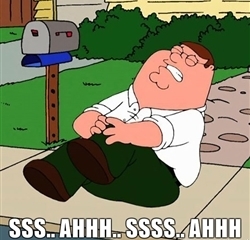 It's just like that time when we posted about memes and silly phrases from Family Guy on TV Tropes...