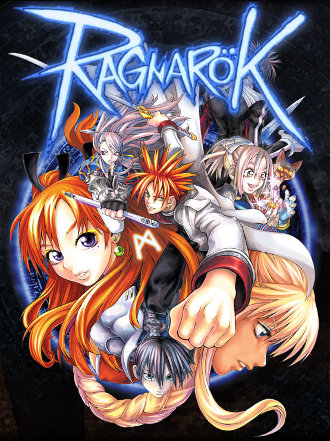 The winds of fate are stirring, and a great storm will descend upon the land. The world is awakening from a thousand year slumber; many great powers long forgotten are returning.
Soon, a new master will rule over Midgard ...
— Skuld, Opening Narration
Soon, it will all end. Ragnarok will come ... again!
— Sara Irene, Volume 7
Advertisement:

If you've ever played Ragnarok Online, this is the series you get to thank for its existence.

In 1997, Myung-Jin Lee (a.k.a. Lord Kaho) returned from his mandatory stint in the South Korean military and formed Studio Dive to Dream Sea (Studio DTDS). Ragnarok was the very first series he worked on under this studio name for Champ Comics, Korea's top manhwa (what the Koreans call manga) publisher. Ragnarok broke a lot of ground for the Korean manhwa industry; in a roundabout way, it was the first Korean manhwa to get a Japanese anime in the form of Ragnarok the Animation (Even though it's loosely based on the MMORPG instead of the manhwa).

While full of direct references to Norse lore, Ragnarok deliberately and intentionally rearranges many aspects of it to produce an entirely different world. In this version of Midgard, Ragnarok marks a period where the Aesir and Vanir battle one another, the giants seek to unmake all creation, and mankind is stuck in the middle of it all—but one faction of the gods is fighting to protect the mortal realm's interests.

At the start of the series, Ragnarok is about to happen again. Fenris Fenrir, the female reincarnation of the eponymous god-eating wolf, is searching for the similarly reincarnated god of light, Balder, in order to finish what they started in the previous cycle. A faction of the Aesir led by Freya is also searching for him, in order to put an end to Fenris' plans before they can even begin ...

... and in a far-off corner of Midgard is Chaos, a Rune Knight who's forgotten everything about his life beyond two years ago, is off bounty hunting in the wilds with Iris Irene, a cleric and heiress to the city of Fayon ...

Currently, there's ten volumes of Ragnarok available, and all ten have been translated to several different languages. It's presently on hold due to the work Myung-Jin Lee is doing with Gravity on Ragnarok Online as well as other series in his studio. Although he's said that he plans to make Ragnarok span over forty volumes, it's looking like it's become an Orphaned Series, as the last volume was published back in 2002.

Not to be confused with the Roguelike named Ragnarok. If you're looking for the actual Ragnarok from Norse lore, check here.