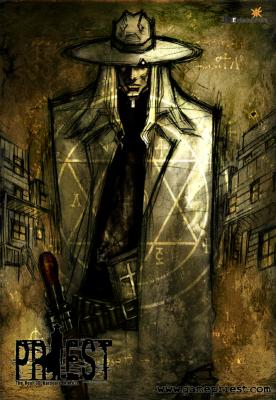 Priest is a manhwa written and illustrated by Min-Woo Hyung. Featuring a strikingly angular art style and a complex story spanning three time periods - the Crusades, the Old West (the primary setting) and the near future - the series follows the immortal priest Ivan Isaacs as he wanders the American frontier seeking revenge on a band of fallen angels after the death of his beloved. Initially a fast-paced, violent horror western, the series has evolved into a complicated and critically acclaimed apocalyptic tale.

A film serving as a sequel to the manhwa came out in May 2011, with its own comic spinoff. It takes place 150 years after the end of the manhwa (whenever that may be - see below), and the remnant note zombie minions but instead referred to as..."feral" vampires (similar to those in 30 Days of Night) are the main antagonists. The Order of St. Vertinez remains to stop them, their chosen warriors branded in tribute to Ivan.

Publication has stopped at Volume 16, with no new issues being printed. Nobody knows why, and the author hasn't mentioned anything relating to it.

Dream Theater (yes, that Dream Theater) has confirmed this manhwa to be the basis for the song In The Presence of Enemies

from their album Systematic Chaos.