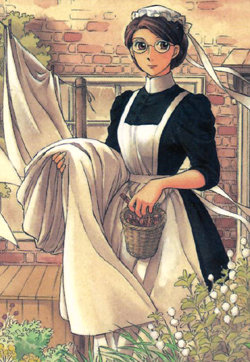 It's London, in the mid-to-late 1890s. Young Emma is a "maid of all works" who lives and works for a former governess, noteworthy and outstanding because of her unusually high level of instruction – her mistress taught her all sorts of subjects – and her glasses, which women of her class and station hardly ever wear. When a former pupil of her mistress, William Jones, drops by for a visit, both maid and man fall in love with each other. However, there are numerous obstacles to their relationship: their different social statuses, the pressure on William to marry another woman, amongst other things.

Sure, you may have heard this story before; the basic premise is a bit cliché, but it works thanks in large part to the likeable and strong personalities of most characters, especially the two leads.

This manga, running in Monthly Comic Beam from 2002 to 2008, was the first long-form story by Kaoru Mori, who quickly demonstrated many of her trademarks that would carry over to future series – strong female characters, historical settings, and obsessive attention to detail particularly with clothing. The main story ran for seven volumes, and was immediately followed up by three more volumes made up mostly of Slice of Life side stories covering the pasts or continuing adventures of secondary or minor characters.

A 12-Episode Anime scripted by Mamiko Ikeda and directed by Tsuneo Kobayashi at Studio Pierrot aired in 2005. It covers the first three books. A second series (also twelve episodes, not counting a recap episode at the beginning) aired in 2007 to complete the story, although its details diverge from the manga significantly toward the climax for dramatic effect and ease of narrative.

In North America, the manga was originally licensed and translated by CMX, the now-defunct manga label of DC Comics, and quickly became one of their most popular series, though its good sales were not enough to keep Time Warner from pulling the plug on the subsidiary. Nearly a decade after CMX shuttered, Yen Press – which was already publishing Mori's subsequent series A Bride's Story – picked up Emma, retranslated it, and released it in five oversized hardcover volumes (basically the same format in which they print Bride's Story but thicker).

The anime was licensed by Nozomi Entertainment in 2008 and released on DVD in two boxsets, one for each season. In September 2018, Nozomi announced their intention to use Kickstarter to attempt to fund an HD upscale for the series and an English dub. The campaign ended 30 days later having grossed over $250,000 – more than enough to dub both seasons. The first season is expected to be released sometime in 2019. There also exists an earlier dub made for Anglophone Asia by Animax, but (as with most Animax dubs) fans of the series don't like to talk about it.

As fans (and Mori herself) like to explain, Emma is "a show about a maid, but not a maid show."