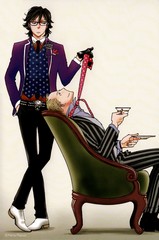 Usotsuki wa Shinshi no Hajimari, also known as Lies Are a Gentleman's Manners, is a Boys' Love manga created by Matsuo Marta, who was an assistant to Est Em.

Medical student Jonathan is caught stealing prescription drugs and selling them to other students by his faculty adviser, Paul, who quickly blackmails Jonathan into having sex with him. After a series of cruel jokes, their one-night relationship turns into something more. But there are some obstacles to them forming a proper relationship, mainly Paul's playboy tendencies and his married state.

At Anime Expo 2012, Digital Manga announced that it had licensed the first volume in print and digital for 2013.