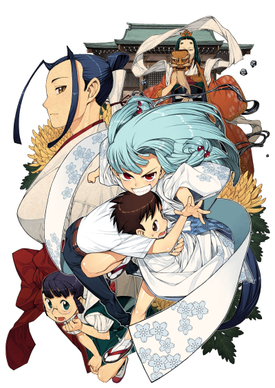 Kazuya Kagami never goes anywhere without the precious Sakura Obi his mother gave him. One day a beautiful, kimono-clad girl named Kiriha appeared before him. Kiriha naturally began to live with Kazuya in his room. Then there's Chisato, Kazuya's childhood friend with glasses and a ponytail, who meddles in his affairs. Soon there's also an overprotective older sister who seems to want to take baths with him. Jumble in a huge-chested miko, beautiful women, and hot girls, and Kazuya's happy, embarrassing, confusing life begins!

Tsugumomo is a manga written and illustrated by Yoshikazu Hamada. It has been running since 2007, and is published by Futabasha in a few of their magazines. It has been collected in 14 volumes. An anime adaptation was aired as part of the Spring 2017 Anime broadcasting season. It premiered on April 6, 2017, and can be legally viewed subbed on Crunchyroll here,

and dubbed by FUNimation here.

A crowdfunded OVA was completed in 2019, along with announcement for a second season. The second season premiered in April 2020.