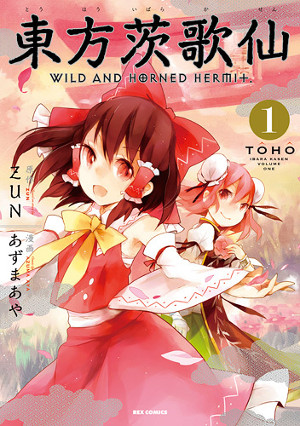 Cover of the first volume.
Kasen: Why did you become a hermit?
Toyosatomimi no Miko: Oho... That's a long story, but I suppose it comes down to one reason. I simply wanted to overcome my humanity. Wasn't it the same for you?
[later]
Kasen: But... my goal in being a hermit is different from yours. I wanted to become closer to people. That's all.
—Chapter 18, The Hermit as a Priest
Advertisement:

In addition to the main Touhou Project video game series, and strangely overshadowed by the franchise's own fanfiction, are a number of canon Spin Offs including comics and other print materials. Touhou Ibarakasen ~ Wild and Horned Hermit is the third manga entry in the Touhou Project franchise, drawing mostly on themes from the games Immaterial and Missing Power, Phantasmagoria of Flower View, Mountain of Faith and Subterranean Animism (along with Ten Desires after its release). Similar to Touhou Sangetsusei it focuses heavily on world-building, but replaces some of that manga's comedy with mystery elements while delving deeper into the relationship between humans and youkai. The manga was written by franchise creator ZUN and illustrated by Aya Azuma, serialized from July 2010 to June 2019 in Ichijinsha's Chara Mel Febri magazine.

Kasen Ibaraki, better known by the pseudonym Ibaraka-Sen ("Wild Rose Hermit") or just Ka-Sen, is a mysterious hermit with the power to guide animals, who has started showing up around the Hakurei Shrine for the first time in a while. Kasen is happy to lend advice or help the people around her with their problems, but tends to become frustrated when she sees people being lazy or greedy (which, given that she hangs around Reimu and Marisa, happens fairly often).

Complicating things, it's heavily implied that like her namesake

Kasen is not a real hermit, but an oni who has disguised herself to achieve some hidden motive. However, her sheer devotion to living as an ally of humans seems a little too convincing for it to be all just an act...

), essentially a type of wizard with Taoism-based Enlightenment Superpowers (most commonly flight, longevity and the ability to go without food or shelter). Examples in other media include Master Roshi in Dragon Ball, and Sages in Naruto.
Advertisement: