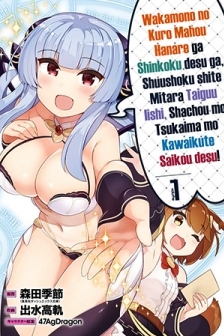 Welcome to the Black Magic Company, Franz!
"You see, black magic revolves around the concept of sacrifice. Black magic is the type of magic that's accompanied by pain. A black mage that's indifferent to this pain will surely meet their ruin. At the same time, companies that ignore the suffering of their employees will surely be crushed. Without a doubt they will perish."
— President Cercer
Advertisement:

Franz is a young mage graduating magic school. He is a prodigy, combining natural talent with a drive to excel, good study habits, and diligent practice. Unfortunately, he immediately seizes up around people, so he flunks every job interview and is passed over dozens of times in favor of less talented applicants. Not a single white magic company will take him.

He has no choice to turn to black magic, the dangerous and disgusting other side of the magic world. However, the first company he applies to turns out to be surprisingly respectful—black magic has such a terrible reputation that they can't afford to be exclusionary and exploitative like the white magic companies. Not only do they quickly see past his poor interview skills to the genius within, but he starts with a generous salary, training, and benefits. He is treated as a human being with a valued skillset rather than another cog in the machine.

Also, he summons a succubus to be his familiar/girlfriend, so that's nice.

Though Young People Recoil from Entering the Black Magic Industry, I Found Its Treatment of Employees Quite Good When I Entered It, and the President and Familiar are Cute too so Everything is Awesome! (Wakamono no Kuro Mahoubanare ga Shinkoku desu ga, Shuushoku shite Mitara Taiguu Iishi, Shachou mo Tsukaima mo Kawaikute Saikou desu!) is a calm, relaxed story about corporate culture and workers' rights, which just so happens to take place in a fantasy world where magic is a standardized industry. The manga is written by Kisetsu Morita and illustrated by Kouki Izumi, and it began serialization in Manga Up! in 2017.