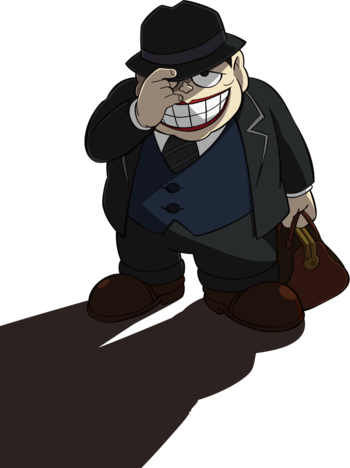 "My name is Moguro Fukuzou. People call me 'The Laughing Salesman'. However, I'm no ordinary salesman, because I'm in the soul business. Human souls, that is."
"Everyone, whatever they be men, women, child or elderly, have a hole in their hearts they desire to fill..."
Advertisement:

The Laughing Salesman (Warau Salesman) is a Black Comedy Psychological Horror manga by duo Fujiko Fujio, and later, Fujiko Fujio A. It's story is about Moguro Fukuzou, an ever-smiling salesman whose job is to help people out with any desire they want. In reality, he ruins said people's lives the moment they betray or deny his help.

The manga ran in Big Comic Manga Sunday between 1968 to 1971. The first animated series ran between October of 1989 through March of 1992, as well as a game for the Sega CD in Japan that consists of three episodes from the show. In 1999 there was a Live-Action Adaptation, but it only lasted ten episodes and is now considered lost media. A second anime, called Laughing Salesmen NEW, with a Setting Update, started running in the spring 2017 anime broadcasting season. It is available for worldwide streaming on Crunchyroll here

A stage play adaptation ran in 2020, with Ryuji Sato in the role of a Younger and Hipper Moguro.