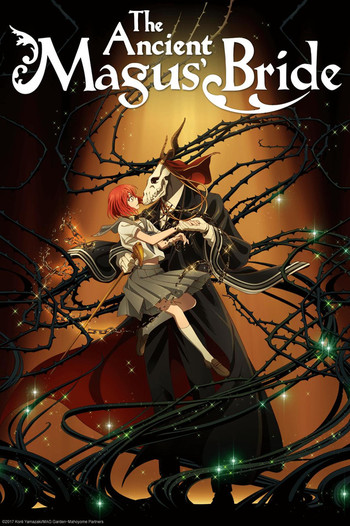 The Ancient Magus' Bride (Mahou Tsukai no Yome) is an ongoing shonen manga by Kore Yamazaki that tells the story of fifteen-year old Japanese orphan Chise Hatori, a sleigh beggy who is bought as a slave by the enigmatic, inhuman British mage Elias Ainsworth. He announces that he will tutor her in the ways of magic... and then abruptly announces he's going to marry her. The problem is that Elias has a Dark and Troubled Past, and Chise herself is practically a magnet for terrible luck, so supernatural horrors quickly start bearing down upon the two of them. Between doing odd jobs for the local church as penance for Elias's former deeds, fighting off curious demons, and trying to find a way to keep Chise's power from overflowing and killing her, the two of them end up getting into far more trouble than they manage to get out of.

It is published online in Japanese by Blade Comics here

A 3-part prequel-OVA, The Ancient Magus' Bride: Those Awaiting a Star written by Kore Yamazaki herself and animated by WIT Studio was released over 2016-2017 as extras for the 6th, 7th and 8th manga volumes.

A anime adaptation began airing in October of 2017

. Funimation's Simuldub of the anime series premiered on October 30th, 2017. Watch it here

See also The Girl From The Other Side which is also about a girl and an animal-skull headed mystical being.

Its Japanese name is not to be confused with Mahou Tsukai no Yoru.

Tropes appearing in The Ancient Magus' Bride include: