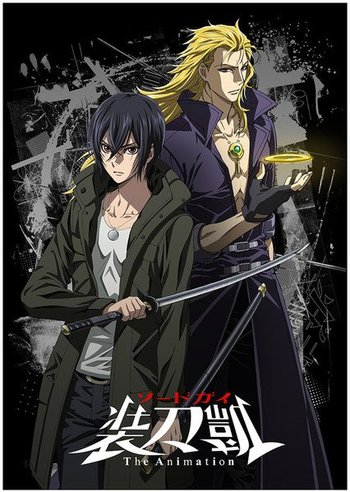 A woman died a suspicious death in the forest. Beside her, the sword-smith Amon finds a new-born boy with a tragic fate and takes him in. About 10 years later, this boy who is named Gai and who has become Amon's apprentice, loses his right arm in an accident while making a sword. Amon decides to take a sword called "Shiryuu," which is a sword with demonic powers that has been passed down for generations, and fashion it into an artificial arm for Gai. That was the beginning of it all...
Advertisement:

The story of this boy, who has become one with a demonic weapon and is drawn into a cruel fate in which he must face countless battles, can be seen as either the story of "a beautiful weapon and an ugly person" or of "the cruelty of weapons and the beauty of humans." This is a completely new world of comic noir.