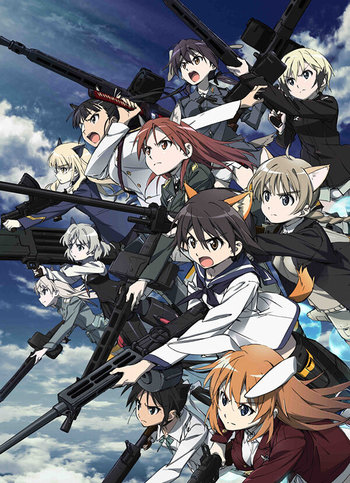 "Even so, I still want to protect them!"* Clockwise from the bottom right: Charlotte Yeager, Francesca Lucchini, Sanya Litvyak, Eila Ilmatar Juutilainen, Perrine Clostermann, Mio Sakamoto, Minna-Dietlinde Wilcke, Gertrud Barkhorn, Erica Hartmann, Lynette Bishop and Yoshika Miyafuji.
"It's my mission and duty to guide her on her path to becoming a full-fledged Witch, for the sake of my, no, the world's benefactor, Dr. Miyafuji..."
— Mio Sakamoto (on Yoshika Miyafuji)
Advertisement:

Originally a Shōnen manga created by Fumikane Shimada, then a series of Light Novels, Strike Witches became an anime series animated by GONZO and was broadcast between July and September 2008

by AIC, following GONZO's bankruptcy. Both seasons of Strike Witches were directed by Kazuhiro Takamura and consist of 12 episodes, with the first half centred around the titular Witches' backstories and livelihoods, while the remainder of each season unlocking more secrets about the nature of the war between humanity and the enigmatic Neuroi. A movie

with an original story was released in March 2012. A new TV anime and an OVA were announced as having been greenlit in October 2013

. It was later clarified that neither are continuations of the existing story

. The first episode of the new OVA, Strike Witches: Operation Victory Arrow, was released in December 2014, showing what happened to the various groups of witches between Strike Witches and The Movie.

A spin-off that began airing in October 2016, entitled Brave Witches, focuses on another cast of characters, the 502nd JFW who also assume the self-titled moniker, and is set in the interim between the first and second seasons.

As part of the franchise's 10th anniversary, 3 new anime projects were announced:

Strike Witches depicts the conflict between the extraterrestrial Neuroi and humanity in an Alternate History; in 1939, the Neuroi invaded earth. Despite lacking understanding about the Neuroi's background or motives, it was clear to humanity that the Neuroi presented a grave threat to their civilization; this prompted the world's armed forces to mount a counteroffensive, enlisting the help of female magic users known as "Witches" and a newly developed weapon christened the "Striker Unit" (devices which bolster the Witches' magical abilities). Wielding spells and specialized firearms, they take to the skies and strive to repel the Neuroi invaders. The anime tells the story of Yoshika Miyafuji, a Fuso witch whose desire to learn about her missing father's fate eventually led her to join the battle against the Neuroi and understand what being a "Strike Witch" means.

The anime series is the first entry in the World Witches series. Additional materials includes eight light novels (covering the Suomus Misfits Squadron and the African front of the war), four manga series, five official doujinshi (also covering the African front), four video games, and occasional short stories released on Humikane's Twitter feed which follow the adventures of the 502nd JFW. Most of the early material is available in Japanese only, though more recent doujinshi and light novels have been receiving international releases, and fan translations exist for several of the Twitter releases.

On first glance, Strike Witches appears as little more than a Fanservice-focused series. However, it ultimately presents what is, at heart, a war story about the camaraderie between the pilots of the 501st Joint Fighter Wing (aka Strike Witches) and their battles against the unknown enemy. Strike Witches shares a superficially similar concept with Sky Girls: both series saw Humikane Shimada's contribution as a character designer.

Mio: [As Shirliey's comms clear up] "Can you hear me, Leutenant! Answer me!!"
Charlotte: "Major, I did it! I exceeded the speed of sound!"
Mio: "Emergency Stop! You're going to crash into the enemy!!"
[Charlotte takes a few seconds to register the "enemy", then puts up her shield immediately prior to punching straight through a Neuroi like it isn't even there.]