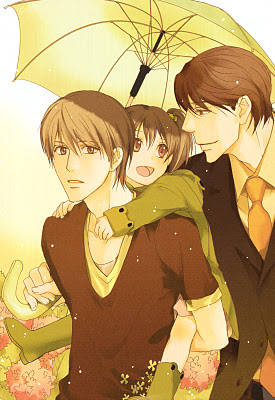 A Boys' Love manga by Auso Kai, which was serialized in Cita Cita from 2008 to 2010. Available in English from Digital Manga Publishing as Only Serious About You.

Oosawa is struggling with the stress of being a working single father to Chizu, often lamenting the fact that he cannot spend more time with his beloved daughter because he has to work hard to make ends meet.

At the shop where Oosawa works, there is one customer in particular who is always coming and going: Yoshioka. Because of their long acquaintance, Oosawa has gotten to know Yoshioka quite well and it's no secret that Yoshioka is gay; he seems to have an endless repertoire of love stories. Oosawa, who has only ever been married to one woman until their divorce, cannot seem to comprehend Yoshioka's character at all. However, when Chizu gets sick and his capacity as a single father is questioned, Yoshioka comes out of nowhere offering help. Slowly but surely, Oosawa starts to realize that the man he despises is very different than what he appeared to be!

Notable in the genre because of the young daughter, allowing the manga to explore the theme of same-sex partners raising a child.