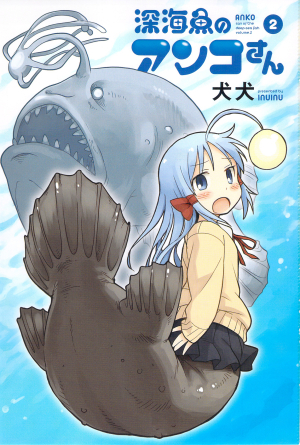 Shinkaigyo no Anko-san (or Anko-san of the Deep Sea Fish) is a 4-volume Slice of Life manga by Inuinu serialized on Comic Meteor.

The story takes place in a town where merpeople have been integrating with humans, using a medicine that temporarily splits their tail into a pair of legs so they can live together with them. High school student Wakasa Otomi, a mermaid enthusiast, is more than delighted by this new environment, and is eager to meet as many mermaids (and spy as many cute tail fins) as she can. One day, she meets a new transfer student, an Atlantic footballfish girl named Tsutsumi Anko. Anko is rather self-conscious about being a deep sea fish, with a drab, warty tail that's so different from her peers' shiny, smooth appendages, but little by little Wakasa helps her get out of her shell. At school, she and Anko deal with various fish problems that intersect with the daily issues of ordinary human high-schoolers.

The manga is a light-hearted, entertaining deal that is sure to please both biology buffs and monster girl fans who need a break from the erotically charged golden boys of the genre like Monster Musume.