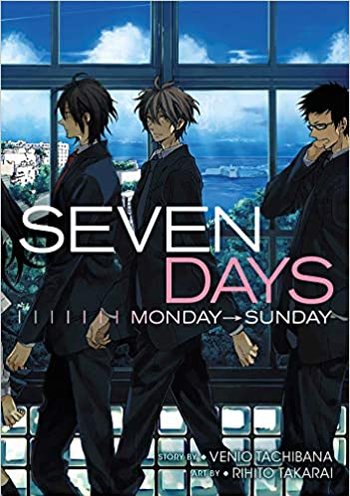 Seven Days is a two-volume Boys' Love manga written by Benio Tachibana and illustrated by Rihito Takarai. Both volumes have been translated and released in English (but good luck finding them), German, Spanish and Polish.

Touji Seryou was famous in his school for his good looks and an unusual habit: he would go out with anyone who confesses to him first on Monday, be a perfect boyfriend and then break up with that person a week after. One Monday, Yuzuru Shino, a male senior, asked Seryou out on a whim to see how he would react and Seryou accepted. Thus, the two started a seven day relationship.

A movie adaptation has been announced, starring Tomoki Hirose

as the main characters. It was confirmed by the illustrator Rihito Takarai on her twitter