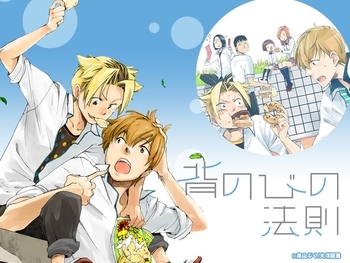 Senobi no Housoku is a shounen ai manga created by Okuyama Puku and originally serialized on the magazine Craft. In 2011 it was licensed by Digital Manga Guild as The Rule of Standing on Tiptoe.

A new student enrolls in Kosuke’s sophomore class in high school. As a perfect foil to Kosuke’s short stature, Raku is tall, manly and popular with girls. Although Kosuke initially feels jealous, he soon learns of Raku’s secret and is asked to keep it a secret. Raku finds himself taking an interest in Kosuke and they begin to grow closer. This is a high school romantic comedy about an odd couple!