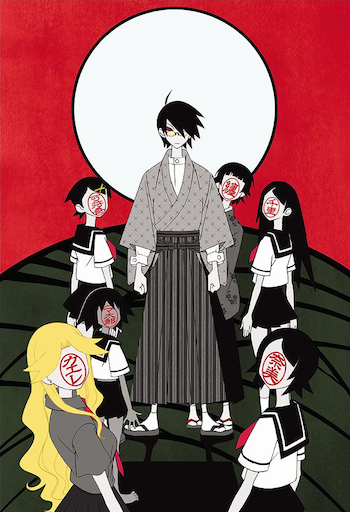 Just a normal teacher and his normal students.
"I'm in despair! [The subject of today's episode] has left me in despair!"
— Nozomu Itoshiki
Advertisement:

What do you get when you take a man who is depressed to the point of melodramatic suicide, and make him the teacher of a psychologically-dysfunctional class full of maniacs, psychos and misfits? No, it's not like your average Slice of Life show. Instead, what Koji Kumeta's Sayonara, Zetsubou-Sensei (roughly "Farewell, Mr. Despair") has become in its dark, disturbed humor and wisecracking background trivia is one of the most amusing Widget Series ever witnessed. The series happily subverts any number of slice-of-life, school anime tropes, while carrying out a wide variety of far odder ones.

Nozomu Itoshiki, a man so unfortunate even his name can be read as "despair", attempts to commit suicide. He is saved by Kafuka Fuura, an insanely cheerful girl who proceeds to ignore his protests at her intervention, incessantly insists that his suicide attempt was only done to try and make himself taller, and attempts to bribe him with 50 yen to let her rename him after the sakura tree he was hanging from.

Terrified, he runs from this beacon of bright light, and ends up at his new teaching assignment where, of course, Kafuka herself awaits, along with her rather... interesting classmates. The insanity only gets deeper from there.

The manga originally ran in Shōnen Magazine from 2005 to 2012. It was adapted into an anime by Studio Shaft in 2007. The anime's second season, (Zoku) Sayonara Zetsubou Sensei ([Vulgar]note The kanji used denotes slang or vulgarities in dictionaries, but zoku with a different kanji means "sequel" Farewell, Mr. Despair) aired in 2008.

The manga is out across the pond courtesy of Del Rey (and later Kodansha), so now you can despair in English! Especially since they stopped publishing any books following volume 14! But, now that the anime is being licensed by Nozomi Entertainment alongside a new English dub, you can continue despairing in English! As of May 2022, the first season has been released with English subtitles, with the rest of the seasons and OVAs set to follow.

Not related to with Goodbye, Mr. Chips (although the title was probably intended as a parody).

The following tropes have left us in despair!