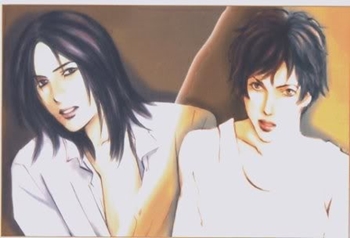 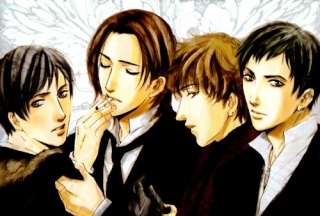 From the right: Tooru, Atori, Hikaru, and Yuki
Advertisement:

The Rules Universe consists of a series of yaoi stories created by Kano Miyamoto, which mainly revolves around Hikaru, his love interests, and friends. Hikaru's high school friend and love rival Ryuu debuts in Please, while Hikaru himself debuts in Kiss. Hydra and its doujinshi revolves around Ryuu, Hikaru, and Hitomi and their high school years. Lovers and Souls covers the story of Hikaru's prostitute friend Tooru and Tooru's sempai, Matsuoko. Rules and its doujinshi focus on Hikaru, Yuki, Tooru, and Atori.

As of 2011, the Rules series Timeline is as follow:

Hydra: When Ryuu transfers to Hitomi's school, he leaves an immediate impression on him. Curious about rumours of a full-scale tattoo on Ryuu's back, Hitomi starts getting closer to him. Before long, the friendship and fascination Hitomi feels for Ryuu start developing into more, but before he has a chance to come to terms with his feelings, Hikaru appears on the scene.... and he has his eyes set on Hitomi.

Lovers and Souls: Tooru is a young model who becomes a gay prostitute because he doesn't care enough about himself. However, he's starting to fall for his sempai. Can Matsouko save him?

Rules: Yuki, a high school student, is confused about his sexuality. He meets Hikaru in the sleazy gay district, and sleeps with him. They begin to play at being lovers, but Konoe's heart belongs to Atori, his friend and classmate. Can Yuki come to terms with his sexuality and reveal his feelings to Atori, and where do Hikaru's true feelings lie?