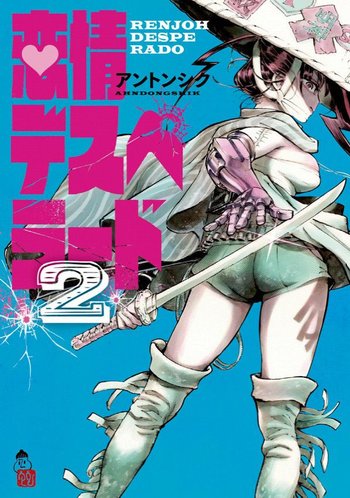 Love Story Desperado
”I'm on the hunt for the best husband in all of Japan.”
Advertisement:

A manga written and drawn by AHN Dongshik and published by Shogakukan, Renjou Desperado is a cross between a western and a samurai manga, with a little bit of steampunk thrown in.

Monko is a wandering samurai on a quest to find the perfect husband. Finding him, however, will be easier said than done as Monko frequently encounters dangerous creatures and bloodthirsty bandits on her journey. She also tends to get herself roped into various situations, often under the promise of finding herself a lover. That said, despite all her best efforts her attempts to find love often end up going comically wrong. Nevertheless she continues to follow her in the Way of Love, wherever that might lead her.