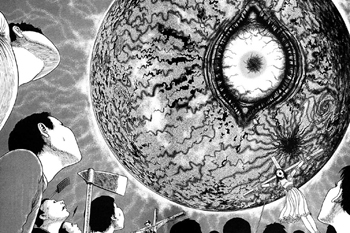 Have you seen the rest of me?
An astronomer in a Japanese observatory, peering into his telescope one night, becomes the first person to witness a planet emerging from a wormhole. He names the planet after his daughter, Remina, and both become world-famous thanks to the unprecedented discovery. However, things take a turn for the worse when the planet enters a collision course with Earth... and the stars along the way seem to be disappearing...
Advertisement:

Remina (Hellstar Remina) is a 2005 single-volume manga by Junji Ito. Like the rest of his works, it's filled to the brim with plenty of Body Horror, Eldritch Abominations, and general horror.

The official English translation was released in December 2020 from Viz Media.