Manga / Portrait of M and N 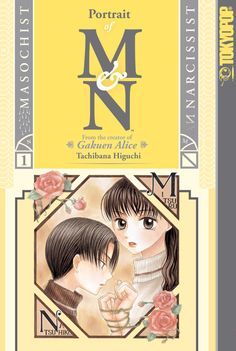 In Japanese, MとNの肖像 or M to N no Shouzou. A shoujo manga written by Tachibana Higuchi, also known for Gakuen Alice. Originally serialized in Hana to Yume from 2000 to 2003, and released in English by Tokyopop starting early 2010.

Mitsuru Abe, 15 years old, female, high school student. Beautiful, graceful, from a fairly well-to-do family and a bit of an introvert. But she has a dark secret... between her natural desire to please her parents, and her strict mother's believing very strongly in "spare the rod, spoil the child" she's grown up to become quite the masochist. Kick her and she'll ecstatically beg you to hurt her more, and won't snap out of it until she loses consciousness. This caused her quite some problems when exactly that accidentally happened at her junior high school, so she enrolled in a high school some distance away so she could start over. Also in her class...

Natsuhiko Amakusa, 15 years old, male, high school student. Also beautiful and introverted, and hides his face behind thick prescription glasses that he doesn't actually need. He too has a dark secret... as a child he had a weak constitution, and spent all of his time inside and alone until he found a mirror, and fell in love with himself. He has since grown up to be quite the narcissist. If he catches a glimpse of himself in a mirror he'll stay there, entranced by his own beauty.

Each of them distance themselves from others, trying to keep their secrets. Inevitably, the two are drawn to each other.