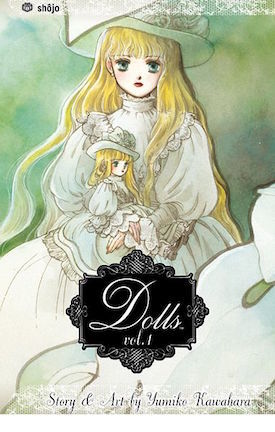 Plant Dolls, published in North America as simply Dolls, is a shoujo manga by the manga artist Yumiko Kawahara, which ran from 1995 to 1999. Rather than having a conventional storyline, Plant Dolls consists of a series of interdependent shorts that all revolve around the Plant Dolls themselves: living dolls that are insanely expensive and subsist on warm milk given three times a day.

From The Other Wiki: The stories revolve around some special dolls, the Plant Dolls, and the people who buy them. The dolls choose their owners, and desperately need their owners' love; they often reflect their owners' personalities for better or worse. Each story is independent of each other, though there may be references to knowledge learned in previous stories. Some stories have a fairy-tale like quality: they are eerie fables meant to warn against certain actions.