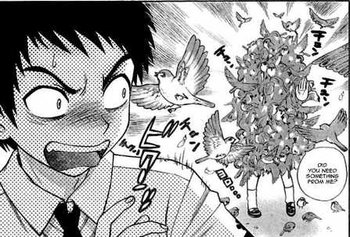 Pink De Pink is a somewhat pornographic manga created by Azuma Tesshin in 2007. It's the story of Akihito Sanada, who's a virgin and friends with a small girl named Hayakawa Suzu. However, their life gets shaken when he sits in a cursed desk prepared for someone like him. This makes Hayakawa turn into a sexier girl named Momo. And if Akihiko doesn't have sex with Momo quickly, the Hayakawa part of the girl will die. Then everything goes even worse...

This manga provides the following tropes: